Students work as engineers to design and test trebuchets (in this case LEGO® MINDSTORMS® robots) that can launch objects. During the testing stage, they change one variable at a time to study its effect on the outcome of their designs. Specifically, they determine how far objects travel depending on their weights. As students learn about the different components of robot design and the specific function controls, they determine what design features are important for launching objects.
This engineering curriculum aligns to Next Generation Science Standards (NGSS).

Engineers solve real-world problems. In fact, all engineers, including mechanical, electrical and chemical engineers, are faced with challenges that they solve via engineering designs, whether through the development of new technologies or improvements on existing functionality. In essence, engineers design and analyze solutions to generate new technology that is sophisticated and user friendly. Launching an object with precision is an ongoing challenge for people who use trebuchets; in this activity, students act as engineers to find solutions to this problem.

Students work as teams of engineers to design and build their own trebuchets. They research how to build and test their trebuchets, evaluate their results, and present their results and design process to the class. 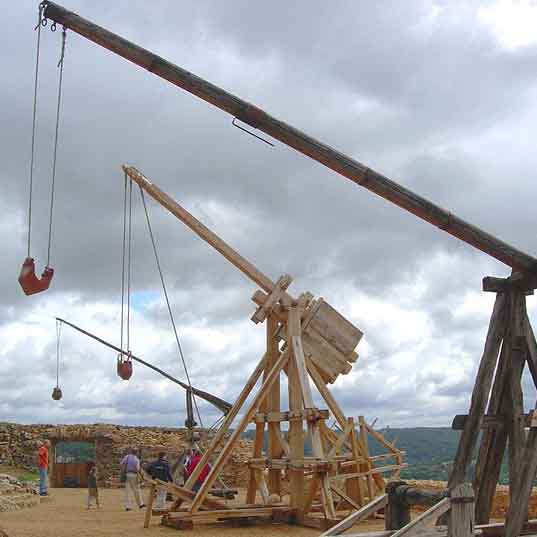 Basic concepts of a how a trebuchet functions.

Who loves watching objects fly through the air? (Give students times to discuss among themselves.) The term launch is often used to describe how far an object can travel. Trebuchets are devices that can launch object through the air. They were designed during medieval times to throw payloads (heavy objects) at enemies. Believe it or not, friendly competitions exist in some areas today in which trebuchets are used to launch pumpkins and even pianos. During this type of competition, a team wins when their trebuchet launches a pumpkin the farthest. Can you imagine how far a trebuchet would have to launch a pumpkin in order to win? (Give students time to guess a distance.)

In this activity, you design and test a trebuchet—actually a robot—to determine how far an object will travel based on its weight. Then, you adjust the angle and the length of the robot arm and determine how far different objects will travel, given modified variables. Basically, through experimentation, you learn how to design the best type of trebuchet to launch a variety of objects.

Why are we learning about trebuchets? I'm glad you asked! Trebuchets are an important educational tool because they demonstrate several principles encountered in basic physics—a branch of science that studies matter and its motion. Today, we will use computers and robots to model some of these physics concepts.

So, in this engineering activity, you apply math and science to predict how objects move through air as you design, build and program your own robotic creation to propel objects through the air. You also learn the importance of a variable, which is something that can be changed. By changing one variable at a time, you can determine what makes an object travel farther. Let's start launching!

During the first century, the Romans figured out different ways to make projectiles reach a certain location. During battle, they had to reiterate their designs in real time so that objects they hurled reached their opponents. The Romans applied a great deal of math and science, as well as trial and error, to solve this problem; the result of their efforts was the design of a crude, but effective, trebuchet—a type of catapult. Today, we use the trebuchet for both advanced solutions, as well as for entertaining purposes, such as catapulting pumpkins in friendly competition.

Part 2: Preparing for the Launch

angle: The amount of rotation that separates two vectors.

constant: The quantity that remains constant in a given equation.

distance: The amount of space between objects.

length: The measure of how long something is from one end to another.

variable: The quantity that changes in a given equation.

Guessing Game: Have students weigh the different objects. Ask them to predict which object will go the farthest, giving reasons for their answers.

Design a Robot: Direct students to design robots that will be able to launch objects. Explain that this is called open-ended design since there is no one right way. Ask them to explain to you how their designed launchers function to launch objects.

Worksheet: Have students use the How Far Does It Go? Worksheet to record their trebuchet experiment data and results. Review their data, graphs and answers to gauge their level of comprehension.

Tuning the Equation: Ask students what happens when both the arm length and arm angle are changed? Ask them how far the object goes when these two variables are manipulated together.

Re-Design: Ask students to think about how changing variables (that is, the arm length and arm angle) affected their robot performances. As engineers, how would they re-design their existing robots to launch an object the farthest? How would they modify the design if accuracy was more important than distance?

Remind students to test their launchers before they begin to launch the objects.

Remind students that all launches should be precise; they should not estimate their launches.

The rubber bands on their robot launchers should have some sort of tension; students may need to adjust the tension after they have launched an object.

For upper grades, have students experiment with other materials, and launch them with different angles and arm lengths. Specifically, challenge students to create robots with long arms and find out what length impairs the function of the arm. Additionally, experiment to find out what arm length is not strong enough to launch an object and what length provides the best launch.

© 2013 by Regents of the University of Colorado; original © 2013 Polytechnic Institute of New York University