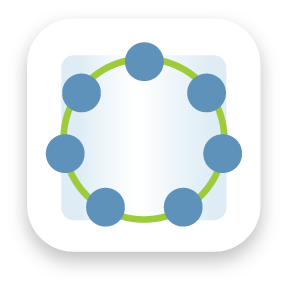 Students design, build and test model race cars made from simple materials (lifesaver-shaped candies, plastic drinking straws, Popsicle sticks, index cards, tape) as a way to explore independent, dependent and control variables. They measure the changes in distance travelled with the addition of mass to the vehicles. Students also practice the steps of the engineering design process by brainstorming, planning, building, testing, and improving their "mint-mobiles."
This engineering curriculum aligns to Next Generation Science Standards (NGSS).

When developing a new product or device, engineers go through many iterations of the engineering design process. First, they imagine lots of ideas and share them with their teammates. Then, the team decides on one best design and plans its final materials, specifications, functionality and aesthetics. Before building a full-scale prototype, they create a small model on which they perform many tests with different independent variables to optimize performance and cost. Once a model has been perfected, they build at full scale. 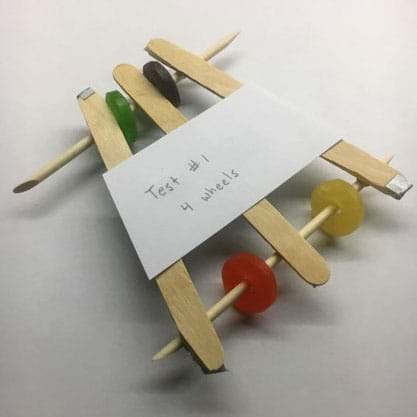 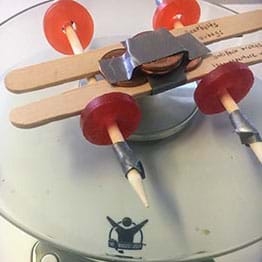 Students learn the metric units engineers use to measure mass, distance (or length) and volume. They make estimations using these units and compare their guesses with actual values. To introduce the concepts, the teacher needs access to a meter stick, a one-liter bottle, a glass container that measu...

(Write Figure 1 on the board as each step is discussed. Start by drawing an arrow in the shape of a circle.)

What do you think engineers do first when they begin to create a new product, say a new type of race car, a new style of backpack, or a new type of skis? That's right, the first thing engineers do is ask; that is, they ask what the product will do, what need they are addressing and what others have done. This also requires conducting research of the problem. Then, an engineer imagines all the possible features and qualities of the product. This takes a lot of creative brainstorming! After an engineer has made a list and some sketches of her/his ideas, all of the engineers in a team get together and share what they have come up with. As a team, they plan on one design by working with the best ideas. Once the details of the design have been decided, the team creates the product; then they get to test it out!

Tests are made on models of the product or device, which are often at a smaller than full-scale size. In the testing phase, the team pays attention to what needs to be changed to the model to make the product work better. The last step of the engineering design process is to improve the design.

Today, working as engineers, we are going to follow the engineering design process and design and build mint-mobiles! To practice identifying variables, we will investigate how adding mass to these race cars changes the distance they travel. We will add mass by securing pennies to the cars, representing a driver and passenger. We'll send them down a ramp and measure the distance they travel, using a meter stick. Think in your heads for a moment: what are the independent and dependent variables in this activity and what is the control? (Allow about 10 seconds for students to individually think about this.) Now, share what you think is the correct answer with the person next to you. (Allow three minutes for a group discussion.) Now—are you ready to brainstorm? Great! Let's get started!

As this activity is written, student teams design their cars on paper first, working from a list of possible materials and then make a list of their needed supplies (including exactly how many wheels, straws, etc.) to request from the teacher. Activity variations are many. For example, limit the number of each type of material, require that each team use the exact same number and type of construction materials, or define a competitive objective to determine the best materials based on vehicle stability or speed with a certain mass.

Engineers use the engineering design process when they are creating new devices. The main seven steps of the engineering design process are: ask, imagine, research, plan, create, test, and improve. The improving step involves starting over again at the beginning of the design process with "ask," that is, "Where does this device need improvement? How can it be made to perform better?" Once a device has been built the first time, it is never complete! Engineers are always improving what they design. Imagine if the cellular phone had never been improved. Or cars, or computers.

1. To begin planning their mint-mobile designs, give the class three minutes for students to individually brainstorm what their designs might look like. Point out the list of available materials listed on the board.

2. Next, working with their partners, direct students to share their ideas and discuss how well each is likely to meet the criteria and constraints of the problem. Then, make drawings of their final, agreed-upon designs. Require the drawings to list the materials and amounts needed to build their mint-mobiles. Remind them that their designs must be able to carry the added mass of a driver and passenger (represented by amounts of pennies) during testing.

3. Once teams have finished their designs, distribute materials and give them time to build.

4. Test the mint-mobiles by sending them down the ramp. Have students record their measurements of distance traveled. This is a good time for students to make modifications to their designs to ensure quality results. What can be improved? Does it roll smoothly? Does it roll straight? Can it carry some added weight?

5. Now, have the students add pennies to their mint-mobiles, representing the mass of a driver and a passenger. Secure the pennies with tape. Have each group test their design with two different amounts of pennies (same for all groups).

7. Before they test their cars with the additional pennies, ask each group to predict which trial will travel the furthest and why they believe this. Have groups write their predictions and justifications on paper.

8. Retest the mint-mobiles and record the new distances traveled with the two amounts of pennies.

10. As a class, review the collection of results on the board. Conclude with a class discussion (using questions provided in the Assessment section) about the experiment variables, how increased mass impacted the distance traveled by the cars, and the design process. During this discussion, address any misconceptions the students identified during their predictions.

control variable : A variable that is neither changed by the engineer/tester nor affected by the independent variable.

independent variable : A variable that is intentionally changed by the engineer or tester.

variable : Something that changes while testing an idea, device or system.

Identifying Variables: Have students categorize variables from different examples as independent, dependent or control variables. For example (as thoroughly explained in the Intro/Motivation section), the variables associated with roller coaster design. Then, have students talk in groups to identify the different variables involved with this activity.

Brainstorming Design Work: Have students follow the engineering design process by brainstorming different designs on paper; then have them share these ideas with their teammate(s). Have them draw their final group design, listing the exact materials they plan to use.

Prediction: Before testing the cars with the additional pennies, ask each group to predict which trial will travel the furthest and why they believe this. Have groups write their predictions and justifications on paper.

Graphing: Have students plot the distances the cars go for the three different masses; one without pennies, and the two with different numbers of pennies. Allow students to interpret results graphically and relate mass to distance traveled.

Class Discussion: Ask students the following questions and discuss as a class.

Making Sense: Have students reflect about the science phenomena they explored and/or the science and engineering skills they used by completing the Making Sense Assessment.

What other independent variables affect the distance traveled by the mint-mobiles? (Possible answers: The material used on the ramp, the type of materials used to build the cart, the slope and length of the ramp, the number of wheels, the stability of the cart.)

What other independent variables could we have tested in this activity? (Possible answers: The dimensions of the cart, the length, height, and slope of the ramp, the number of wheels

What is another dependent variable in this activity that might be of interest to an engineer designing a real race car or roller coaster cart? (Possible answers: Speed, stability.)

What other independent variables could we have tested in this activity? (Possible answers: The type of ramp, the type of materials used to build the cart, the slope and length of the ramp, the number of wheels on the mobile.)

What are the dependent variables that would be affected by these changes? (Possible answers: Speed, distance traveled, and stability.)

The mint-mobiles roll best on smooth surfaces rather than the textured surfaces of carpets, so build the testing ramp on a tabletop and place a thin poster board at the bottom of the ramp.

If students' mint-mobiles are quite small, they may not be able to hold many pennies. If so, tape on a few pennies at a time to determine a reasonable maximum amount.

Team Test Your Instructions: In addition to each team designing a mint-mobile with a sketch and list of materials, have them write instructions on how to build the mint-mobile and exchange designs with another group. Tell the students to build the other team's mint-mobile following the instructions using only the supplies listed. This exercise sharpens students' awareness of the importance of accuracy and clear communication in their engineering plans. Or similarly, conduct The Universal Language of Engineering Drawings activity, in which students practice the ability to produce clear, complete, accurate and detailed design drawings for a mint-mobile-type model car, using only specified materials. Teams trade drawings and attempt to construct the model cars in order to determine how successfully the original design intentions were communicated through sketches, dimensions and instructions.

© 2010 by Regents of the University of Colorado

The contents of this digital library curriculum were developed under grants from the Fund for the Improvement of Postsecondary Education (FIPSE), U.S. Department of Education, and National Science Foundation (GK-12 grant no 0338326). However, these contents do not necessarily represent the policies of the Department of Education or National Science Foundation, and you should not assume endorsement by the federal government.