The cost per group includes the purchase of a small quantity of fluorescent microplastic beads (enough for 50 teams). This activity also uses some non-expendable (reusable) items such as microscopes.

Student teams investigate the migration of small-particle plastic pollution by exposing invertebrates found in water samples from a local lake or river to fluorescent bead fragments in a controlled environment of their own designs. Students begin by reviewing the composition of food webs and considering the ethics of studies on live organisms. In their model microcosms, they set up a food web so as to trace the microbead migration from one invertebrate species to another. Students use blacklights and microscopes to observe and quantify their experimental results. They develop diagrams that explain their investigations—modeling the ecological impacts of microplastics.
This engineering curriculum aligns to Next Generation Science Standards (NGSS).

Engineers design and implement municipal and industrial water treatment processes. To monitor the success of discharge and filtration efforts, they routinely test samples of both water and the organisms that depend on the integrity of the local ecosystem. Like engineers, students create model microcosm systems on which they conduct experiments to introduce pollution and then measure and observe the effects of human technology on the natural environment.

The Plastisphere: Plastic Migration and Its Impacts

Students learn how plastics in the human trash stream end up as microplastic particles entering the food chains via polluted water, harming animals and people. They think of ways to reuse or replace the common plastic items they discard daily. They learn how microplastics persist in the environment ...

The Plastisphere: Plastic Migration and Its Impacts 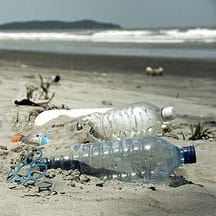 Sun Keeps the Pests Away: How Soil Solarization Works

Students learn how the process of soil solarization is used to pasteurize agricultural fields before planting crops. In preparation for the associated hands-on activity on soil biosolarization, students learn how changing the variables involved in the solarizing process (such as the tarp material, s...

Sun Keeps the Pests Away: How Soil Solarization Works

Students learn about energy and nutrient flow in various biosphere climates and environments. They learn about herbivores, carnivores, omnivores, food chains and food webs, seeing the interdependence between producers, consumers and decomposers. This lesson is part of a series of six lessons in whic...

It is recommended that students complete the associated lesson prior to conducting this activity.

(Be ready with a computer and projector to show students Figure 1, an aquatic and terrestrial food web, which is provided as the Food Web Visual Aid, a PowerPoint® file.)

Take a look at this diagram of an aquatic and terrestrial food web. (Give students some time to observe the diagram. Then lead a class discussion about what the lines and labels represent. Suggested prompts are provided below.)

(Next, introduce students to the ethics of animal research.) In today’s investigation, we will test the impact of plastic on an ecosystem and the living things that exist within it. In engineering teams, you will create a small ecosystem that you populate with small living things. To model and investigate what happens in the real world, you will expose the organisms to plastics that may interfere with their health.

What might be some of the pros and cons about this research investigation approach? (Give students time to discuss and record their ideas in small groups. Possible pros: Modeling effects of pollution in a controlled environment to isolate pollution effects, get a detailed view of how pollution travels through the food chain, etc. Possible cons: Harming the organisms as part of the experimental testing; model conditions may not accurately depict the real world, etc.)

(Lead students through an ethics discussion. Suggested prompts are provided below.)

anthropogenic: Originating in human activity. For example, having to do with human impact on the environment.

bioindicator: Any species (an “indicator species”) or group of species whose function, population or status reveals the qualitative status of the environment.

biomagnification: The increasing concentration of toxins in an organism as a result of its ingesting other plants or animals in which the toxic substances are less concentrated. The process whereby certain substances work their way into bodies of water and then move up food chains, manifesting in progressively greater concentrations.

food web: A system of interconnected food chains within an ecological community.

microcosm : A simplified, artificial ecosystem used to simulate and predict the behavior of a natural ecosystem under controlled conditions. Also called an experimental ecosystem.

trophic level: Each of several hierarchical levels in an ecosystem, comprising organisms that share the same function in the food chain and the same nutritional relationship to the primary sources of energy. The trophic level of an organism is the position it occupies in a food chain.

Local Food Chains: Have students describe food chains that they observe in daily life. For example: sunlight > tree > nut > squirrel > hawk OR sunlight > grass > cow > human. Student answers indicate their base understanding of food chains and the interconnectedness of organisms in the natural world.

Observation and Experimentation: As student groups are creating and examining their microcosms, make sure they participate in the following experiment activities:

Reports and Reflections: Give groups time to reflect on their results through the following assignments:

If unclear about how to find local water with three food chain levels present, get assistance from county extensions or nearby university biology departments who know more about finding aquatic organisms.

Have students assess the water quality of the ecosystem from which the original organisms were taken, based on the types of organisms present. Learn about the categories and common species of these bioindicators at https://environment.arlingtonva.us/streams/macroinvertebrates/.

Have students observe the microcosm systems for longer periods of time in order to ascertain long-term impacts on various species.

Show students a 1:46-minute video, Plankton Munching Microplastics by Bo Eide at https://www.youtube.com/watch?v=2oQeXhURTgY. This video, filmed through a microscope, shows little sea creatures, filter feeders, that are transparent, which enables observation of the accumulation of plastic particles colored with fluorescent dye (little green dots) that have been ingested by the plankton.

This curriculum was based upon work supported by the National Science Foundation under RET grant no. EEC 1301051—Shaping Inquiry from Feedstock to Tailpipe with Education Development (SHIFTED) through the Center for Environmentally Beneficial Catalysis, hosted by the University of Kansas Lawrence and the Southeast Kansas Education Service Center (referred to as Greenbush). Any opinions, findings, and conclusions or recommendations expressed in this material are those of the authors and do not necessarily reflect the views of the National Science Foundation.