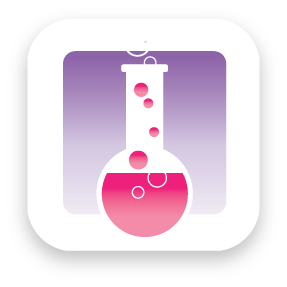 Students learn how to classify materials as mixtures, elements or compounds and identify the properties of each type. The concept of separation of mixtures is also introduced since nearly every element or compound is found naturally in an impure state such as a mixture of two or more substances, and it is common that chemical engineers use separation techniques to separate mixtures into their individual components. For example, the separation of crude oil into purified hydrocarbons such as natural gas, gasoline, diesel, jet fuel and/or lubricants.

Almost all materials in the universe are found naturally in impure states such as mixtures of two or more substances. In chemistry and chemical engineering, a separation process is commonly used to transform a mixture of substances into two or more distinct materials. The separated products might differ in chemical properties or some physical property, such as size or crystal modification or other separation into different components. One example of separation application is crude oil, which is a mixture of various hydrocarbons. While valuable in this natural form, demand is greater for the various purified hydrocarbons such as natural gases, gasoline, diesel, jet fuel, lubricating oils, asphalt, etc. Chemical plants commonly have from 40% to 70% of both capital and operating costs in separations.[1] Since separations are ubiquitous in chemical plants and petroleum refineries, chemical engineers must be familiar with a variety of separation methods.

To gain an understanding of mixtures and the concept of separation of mixtures, students use strong magnets to find the element of iron in iron-fortified breakfast cereal flakes. Through this activity, they see how the iron component of this heterogeneous mixture (cereal) retains its properties and ...

Students gain a better understanding of the different types of materials as pure substances and mixtures and learn to distinguish between homogeneous and heterogeneous mixtures by discussing an assortment of example materials they use and encounter in their daily lives.

Students examine the periodic table and the properties of elements. They learn the basic definition of an element and the 18 elements that compose most of the matter in the universe. The periodic table is described as one method of organization for the elements.

Everything around us is made of matter. Matter can be classified in to two broad categories: pure substances and mixtures.

Lavoisier, a French chemist, classified pure substances into elements and compounds on the basis of quantitative studies. He showed that when we heat mercuric oxide it changes into mercury and oxygen.[2]

Mercuric oxide is a compound because it decomposes into simpler substances, whereas mercury and oxygen cannot be further decomposed into anything simpler as they are elements.

All matter is composed of elements that are fundamental substances that cannot be broken down by chemical means. Element is defined as a substance that can not be further reduced as to simpler substances by ordinary processes. Another definition of element: a material that is composed of only one type of atom. The elements hydrogen, carbon, nitrogen and oxygen are the elements that make up most living organisms. Some other elements found in living organisms are magnesium, calcium, phosphorus, sodium and potassium.

Of the 114 known elements, 92 occur in nature. By the late 1800s many elements had already been discovered. Dmitri Mendeleev, a Russian chemist, proposed an arrangement of known elements based on their atomic masses. The modern arrangement of the elements, the periodic table of elements, is a tabular display of the known chemical elements (see Figure 1) in which they are arranged according to their atomic numbers. The elements are arranged by electron structure so that many chemical properties vary systematically across the table. Each element is listed by its atomic number and chemical symbol.

Energy changes are involved in the formation of a compound. For example, iron and sulphur react only when heat is supplied. The constituent elements in a compound are in a fixed proportion by weight. In water, hydrogen and oxygen are present in a fixed ratio of 1:8 by weight.

A compound is a homogeneous substance. That is, it is same throughout in properties and composition. Compounds also have fixed melting and boiling points.

A mixture is a material containing two or more elements or compounds that are in close contact and are mixed in any proportion. For example, air, sea water, crude oil, etc. The constituents of a mixture can be separated by physical means like filtration, evaporation, sublimation and magnetic separation. In the preparation of a mixture, energy is neither evolved nor absorbed. A mixture has no definite melting and boiling points. The constituents of a mixture retain their original set of properties. For example, sulphur dissolves in carbon disulphide and a magnet attracts iron filings. To help illustrate mixtures and different types refer to the associated activity Element, Mixture, Compound for students to discuss materials they use in their daily lives to gain a better understanding of pure substances vs. mixtures, and homogeneous vs. heterogeneous mixtures.

The prefix "homo" indicates sameness. A homogeneous mixture has the same uniform appearance and composition throughout its mass. For example, sugar or salt dissolved in water, alcohol in water, etc.

Separation of Components of Mixtures

Most materials found in nature are in the form of mixtures. In engineering, a separation process is used to transform a mixture into two or more distinct products. This is done by considering that different components of the mixture may have different properties such as:

Depending on the raw mixture, various processes can be employed to separate the mixtures. Often, two or more of these processes must be used in combination to obtain the desired separation. In addition to chemical processes, mechanical processes are sometimes applied. In the example of crude oil, one upstream distillation operation feeds its two or more product streams into multiple downstream distillation operations to further separate the raw crude, and so on, until final products are purified.

Chemical engineers use these separation techniques to purify naturally found substances or isolate them from other substances. For example, crude oil, also called petroleum, is a complex mixture of carbon and hydrogen (hydrocarbons) that exists as a liquid in the Earth's crust. Chemical engineers apply various distillation methods to purify various hydrocarbons such as natural gases, gasoline, diesel, jet fuel, lubricating oils, asphalt, etc., from the raw crude oil. Water purification is another good example of application of separation techniques.

element: A substance consisting one type of atom.

heterogeneous mixture: A mixture that consists of visibly different substances or phases.

homogeneous mixture: A mixture that has the same uniform appearance and composition throughout its mass.

solute: Material dissolved in a solution.

solution: A homogeneous mixture composed of two or more substances.

solvent: A liquid, solid, or gas that dissolves another solid, liquid, or gaseous solute.

Post-Lesson Test: Administer the Mixtures Test to gauge student comprehension of the lesson content and concepts.

Explain to students the distillation process for crude oil. Refer to the following source of information on the topic: