Students observe four different classroom setups with objects in motion (using toy cars, a ball on an incline, and a dynamics cart). At the first observation of each scenario, students sketch predicted position vs. time and velocity vs. time graphs. Then the classroom scenarios are conducted again with a motion detector and accompanying tools to produce position vs. time and velocity vs. time graphs for each scenario. Students compare their predictions with the graphs generated by technology and discuss their findings. This lesson requires assorted classroom supplies, as well as motion detector technology.

Many types of engineers, such as systems engineers, structural engineers and civil engineers, carefully observe and analyze systems to determine what causes them to behave as they do. They examine how systems work and make predictive models of them. In this lesson, students observe systems and make predictions about what they see, just like real engineers do. Doing this serves as a hands-on application of aspects of the engineering design process, the steps when needs are identified and research is conducted.

Students prepare for the associated activity in which they investigate acceleration by collecting acceleration vs. time data using the accelerometer of a sliding Android device. Based on the experimental set-up for the activity, students form hypotheses about the acceleration of the device. Students...

Students learn about slope, determining slope, distance vs. time graphs through a motion-filled activity. Working in teams with calculators and CBR2 motion detectors, students attempt to match the provided graphs and equations with the output from the detector displayed on their calculators.

Students learn about video motion capture technology within the context of a high school physics class. They learn about vector components, magnitudes and directions, position, velocity, and acceleration. Students use a (free) classroom data collection and processing tool, the ARK Mirror to visual a... 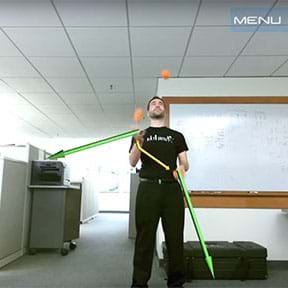 A basic understanding of the concepts of position, velocity and acceleration, and how they relate to each other.

(Have ready the supplies [toy cars, ball, incline, dynamics cart] to present the four motion scenarios, plus motion detectors with their necessary software and/or interfaces, as described in more detail in the Lesson Background section.)

For each scenario, observe the moving objects and sketch predicted position vs. time and velocity vs. time graphs for each. After you observe all the examples, consider these questions. (Refer to Table 1; read the questions aloud, write them on the classroom board, or show the class the Six Questions Visual Aid.)

(Proceed to demonstrate the four scenarios in the classroom, directing students to sketch predicted graphs for each and then answer the questions in Table 1.)

Now, using a motion detector, interface and software, observe each moving object again, while collecting data to generate position vs. time and velocity vs. time graphs as the objects are moving. To accomplish this, use a sonar-based motion detector. These devices measure where an object is located as long as it is directly in front of the sensor and nothing between the object and the sensor blocks the sound waves. Then use software to interpret the data collected using the motion detector. Finally, compare your predicted graphs to the graphs produced using the motion detector's data and discuss any differences.

To collect data for generating position vs. time and velocity vs. time graphs, have students use sonar-based Vernier motion detectors or similar devices. These sensors require software to interpret the data. With the Vernier device, use Logger Pro, or Logger Lite—a free download. Some motion detectors also require an interface, but Vernier has a version that connects directly to a computer via USB. Vernier also has a CBR version that connects directly to a compatible TI-calculator and uses internal software to record data.

As students compare their predicted graphs to the graphs produced using the motion detector data, the ultimate goal is for them to understand that the slope of a tangent line at a given point is the object's instantaneous velocity and that a velocity vs. time graph is just a representation of an object's instantaneous velocities over time. If necessary, guide the class discussion so that students reach this understanding.

In recognizable terms: In common words, acceleration is a measure of the change in speed of an object, either increasing (acceleration) or decreasing (deceleration). This definition is not completely accurate because it disregards the directional component of the velocity vector. Vectors have two components—magnitude and direction. When discussing speed, we only consider the change in magnitude.

In mathematical terms: Many different mathematical variations exist for acceleration. Below is a partial listing:

acceleration: The rate of change of an object's velocity.

position: An object's location relative to a reference point.

Riemann sum: The approximation of the area of the region under a curve.

secant line: A line that locally intersects two points on the curve. Secant lines can be used to approximate the tangent to a curve by moving the points of intersection of the secant line closer to the point of tangency.

velocity: The rate of change in an object's position with respect to time.

Pre-Lesson Assessment: Ask students the following questions to gauge their prior knowledge:

Formative Assessment: As students are engaged in the lesson, ask these (or similar) questions:

The contents of this digital library curriculum were developed as a part of the RET in Engineering and Computer Science Site on Infusing Mobile Platform Applied Research into Teaching (IMPART) Program at the University of Nebraska Omaha under National Science Foundation RET grant number CNS 1201136. However, these contents do not necessarily represent the policies of the National Science Foundation, and you should not assume endorsement by the federal government.