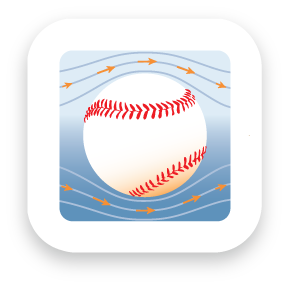 Bernoulli's principle relates the pressure of a fluid to its elevation and its speed. Bernoulli's equation can be used to approximate these parameters in water, air or any fluid that has very low viscosity. Students use the associated activity to learn about the relationships between the components of the Bernoulli equation through real-life engineering examples and practice problems.
This engineering curriculum aligns to Next Generation Science Standards (NGSS).

The Bernoulli principle has a wide range of applications in engineering fluid dynamics, from aerospace wing design to designing pipes for hydroelectric plants. For example, in the case of a hydroelectric plant that utilizes water flow from mountain reservoir, knowing the elevation change from the reservoir in the mountains to the plant in town helps engineers determine how fast the water will be flowing through the energy-generating turbines in the plant.

tudents are introduced to the similarities and differences in the behaviors of elastic solids and viscous fluids. In addition, fluid material properties such as viscosity are introduced, along with the methods that engineers use to determine those physical properties.

Students learn about the fundamental concepts important to fluid power, which includes both pneumatic (gas) and hydraulic (liquid) systems.

(Note that Figures 1 and 2 are also available as PowerPoint slides in the Bernoulli Flow Graphics attachment. They are also suitable to print out as overhead transparencies or student handouts.)

Have you ever wondered how an airplane can fly? The simple answer is that as air flows around the wing, the plane is pushed up by higher pressure air under the wing, compared to lower pressure over the wing. But to understand this phenomenon more deeply, we must look at a branch of physics known as fluid mechanics, and in particular a principle known as the Bernoulli equation. Not only can this equation predict the air pressure around an airplane's wing, but it can also be used to find the force of high winds on a skyscraper, the pressure through a chemical reactor, or even the speed of water coming out of the hose in your backyard.

The Bernoulli equation states that for an ideal fluid (that is, zero viscosity, constant density and steady flow), the sum of its kinetic, potential and thermal energy must not change. This constraint gives rise to a predictable relationship between the velocity (speed) of the fluid, its pressure, and its elevation (relative height). Specifically, given two points along a streamline (an imaginary line tangent to the direction of flow, as shown in Figure 1), the Bernoulli equation states that:

where v is fluid velocity, ρ is fluid density, z is relative height, and P is pressure. Applying this equation to an example helps to make it clearer. Consider a reservoir located up in the mountains with a pipe leading down to a town at a lower elevation. The pipe delivers water to a hydroelectric plant, and we want to know how fast the water will flow into the plant turbines. Figure 2 illustrates this situation.

Now let's get back to how Bernoulli's principle applies to the wing of an airplane. When air flow is split around a wing, the air above the wing moves faster than the air below, due to the wing's shape. Since the velocity of the upper air increases, its pressure must decrease to maintain balance — as described in Bernoulli's equation. This results in greater pressure below the wing than above, which forces the wing upwards, enabling flight!

The Bernoulli equation is an important expression relating pressure, height and velocity of a fluid at one point along its flow. The relationship between these fluid conditions along a streamline always equal the same constant along that streamline in an idealized system. An idealized system refers to a fluid that has a constant density (incompressible), and is inviscid.

Assuming that the fluid is inviscid means that it has no viscosity. Therefore, certain effects of viscosity, such as water sticking to the walls of its pipe or container, do not apply.

Because the Bernoulli equation is equal to a constant at all points along a streamline, we can equate two points on a streamline. Using information on the system at one point, we can solve for information at another.

According to the Venturi effect, a fluid's pressure decreases as its velocity increases. The Bernoulli equation puts this relationship into mathematical terms and includes a term for fluid height. To illustrate this relationship, consider water moving down a water slide. At the top where you load, the water is slow moving, pushed only by the water behind it. When the slide drops, the water rushes down quickly, increasing speed as it falls. Thus, the velocity is also affected by gravity through height. When all these terms are related and scaled for density and gravity, we have the Bernoulli equation, where v is fluid velocity, ρ is fluid density, h is relative height, and P is pressure. Notice the constant has units of pressure as well.

The Bernoulli equation can also be interpreted as an expression of conservation of energy, which can be formulated as

where KE is kinetic energy, PE is potential energy, and W is the work done on the system. Imagine a block of ice sliding down the water slide at some velocity. The block has a kinetic energy equal to one-half its mass times its velocity squared, or

where KE is kinetic energy and m is mass. The block also has a certain potential energy described by

where V is volume. The equation for conservation of energy becomes

Dividing this equation by the volume, and recalling that density, ρΔ equals mass divided by volume, it reduces to

which is the Bernoulli equation.

Engineers can set the Bernoulli equation at one point equal to the Bernoulli equation at any other point on the streamline and solve for unknown properties. Students can illustrate this relationship by conducting the A Shot Under Pressure activity to solve for the pressure of a water gun! For example, a civil engineer might want to know how much pressure changes in a pipe between the top of a building and the ground.

Bernoulli Principle: In fluid dynamics, Bernoulli's principle states that for an inviscid flow, an increase in the speed of the fluid occurs simultaneously with a decrease in pressure or a decrease in the fluid's potential energy. Named after Dutch-Swiss mathematician Daniel Bernoulli who published his principle in his book Hydrodynamica in 1738. Also called the Bernoulli effect.

inviscid flow: Flow in which one can ignore the effects of fluid viscosity.

streamline: A line tangent to the flow of a fluid at any given instant.

Venturi effect: The reduction in fluid pressure that results when a fluid flows through a constricted section of pipe. As a fluid's velocity increases, its pressure decreases, and vice versa. Named after Italian physicist Giovanni Battista Venturi (1746–1822).

Matching: To help students with this lesson and its associated activity, create a list of physics equations that they have already studied, such as kinetic energy, potential energy, work, kinematics equations. Randomly write the physics terms on the left side of the board and the matching halves of the equations (out of order) on the right side of the board. As a class, have students match the correct sides together. Examples:

Discussion Question: During the next class period, lead a five-minute discussion asking students what they learned from the homework assignment.

You may want to use PowerPoint slides of Figure 1. Simple Pipe Flow, and Figure 2. Reservoir Example, with the class, as provided in the attached Bernoulli Flow Graphics.

Show students an interactive animation of the Bernoulli Principle in the form of a cut-away view of a pipe with a shape that you can change using your computer's mouse, resulting changes in the pressure, cross sectional area and velocity of the fluid flowing through the pipe, which are graphed below the pipe. See Mark. Mitchell's website called, "Animated Demonstration of Bernoulli's Principle," at http://home.earthlink.net/~mmc1919/venturi.html

© 2009 by Regents of the University of Colorado