Students learn about sound and sound energy as they gather evidence that sound travels in waves. Teams work through five activity stations that provide different perspectives on how sound can be seen and felt.

The Energy of Music

Students are introduced to sound energy concepts and how engineers use sound energy. Through hands-on activities and demonstrations, students examine how we know sound exists by listening to and seeing sound waves

The Energy of Music

Students investigate how sound travels through string and air. They are given a design challenge to redesign the string telephone for distance. 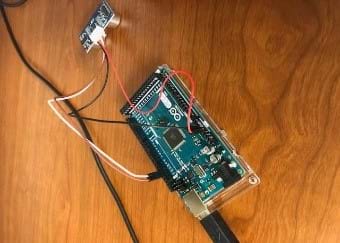 Students should be familiar with sound being described as a wave. This lesson works well accompanying a science unit on sound or waves.

(For a simple demonstration as part of this introduction, have handy a metal slinky and a [approximately] five-foot long, small-diameter PVC pipe [or other kind of rod].

Can you hear me now? (Students should answer affirmatively.) If we were outside on opposite sides of the playground, would you be able to hear me? (Answer: No) Why is that? (Expect various answers.) Sound waves tend to lose their power as they travel. Let's take a look at a model.

(Pick up a metal slinky and place it over the rod. Have a volunteer hold onto the other end of rod. Stretch the slinky across the rod and ask volunteer to firmly hold his/her end of the slinky. Push abruptly on the slinky from your end to create a wave that moves from side to side.)

Notice how the wave moves across the slinky. This is similar to how sound waves move through air and solids. Do you see how the wave starts out strong and tends to die out on the other end? The wave is given energy at the beginning, but that energy is used up as the wave travels through the slinky. Let's see it again. (Demonstrate the wave again.) The slinky steals the energy that is given to the wave.

Now imagine that on the other end of the slinky is your ear. Also imagine that my mouth is on my end. As I talk, I produce waves in the air that travel to your ear. What does the slinky represent? (Answer: The air.) So that is how sound travels: from my vocal chords to your ears in the form of waves that decrease in strength with distance. Refer to the associated activity String Telephones to illustrate with a hands-on experiment to illustrate how sound travels through both string and air by developing string telephones.

Do you think it would be helpful to be able to speak with someone who is far away from you, maybe in another city? You think yes? Well, you are not the only ones. What is the invention that allows us to do this? (Answer: The telephone;.) Do you know who invented it?

(Optional - Print out the following paragraph and read it as a class.)

Alexander Graham Bell (1847–1922) was a communications engineer and inventor who, like his family, had a lifelong fascination with sound. Both his father and grandfather taught people how to speak more clearly, including the deaf. Bell's mother was deaf, and while others would speak to her through an ear tube (a cone-shaped device that makes sounds louder), young Alexander decided to speak in a low voice at her forehead. Alexander devoted much of his life to helping people hear and be heard. He is most famous for enabling people to hear each other over long distances by using telephones, which he invented in 1876.

How do you think Alexander's mother could hear him? (Answer: She could feel the vibrations of his voice.)

The name of this lesson is "Sound Extenders." Where do you think this name comes from? (Answer: The telephone "extends" sound over great distances.) What are some other "sound extenders?" (Answers: Cell phones, live television, video phones, loudspeakers.) The people who create and make available these "sound extenders" are known as communications engineers. They notice that sound dies down with distance, just as we notice it, and use their creativity to enable sound to travel greater distances. Alexander Graham Bell was one of the first communications engineers.

A sound wave is often thought of as a pulse of energy. The wave travels by pushing on the medium it is moving through — air, liquid or solid. With each push on the medium, that portion of the medium pushes on the next portion and so on, thus creating the chain of pressures that is the sound wave. It takes energy to create a sound wave — to create movement that is opposed by friction. It is important to note that the energy is not destroyed as the wave travels along; rather, it is turned into a tiny amount of heat (this is the same phenomenon as rubbing your hands together: overcoming friction creates heat).

The less energy a sound wave has, the less loud it is when it strikes our ear. Therefore, a wave that has been traveling a great distance, though loud to the person nearby, could be quite soft to the person it finally reaches. Out of this characteristic of sound, and other limitations, the need for a telephone was perhaps recognized. A telephone does not record sounds and then replay them at the other end of the line. Rather, a telephone enables sound waves to be "extended" over a greater distance by translating them into a wave on an electric current. This translation is reversed at the other end of the line to create a wave through the air, which we are able to hear.

Why is the telephone a useful engineering achievement? Well, we know that the sound we hear gets quieter with distance, so we need things like telephones (or other engineered devices that "extend sound") to talk to each other from far away. How have telephones and cell phones made life easier? (Answers will vary, but may include: communications with family, friends and businesses far away.) Why do you think engineers like Alexander Graham Bell invent the things they do? Alexander Graham Bell wanted to help people hear each other and be heard. Many engineers design things that help other people. Engineers have improved Bell's original telephone over the years by making the sound clearer and the telephones portable.

acoustics: The study of sound; the characteristics of sound in an environment.

communications engineering: The branch of engineering having to do with developing and maintaining technology used for communication, such as telephones.

Poll: Before the lesson, ask all students:

Brainstorming: As a class, have students engage in open discussion. Remind them that in brainstorming, no idea or suggestion is "silly." All ideas should be respectfully heard. Encourage wild ideas and discourage criticism of ideas. Have students raise their hands to respond. Ask students