Students are introduced to the concept of the image of music. After listening to a song, they draw images of it by deciding where different musical instruments were placed during recording. They further investigate audio engineering by modeling the position of microphones over a drum set to create a desired musical image.

Audio engineering has a long history involved with the creation of pop culture. Audio engineers can be found in recording studios around the world. They enhance and create sounds and special effects for music and films. Audio engineers make better and clearer the sounds we hear through televisions, radios, MP3 players, speakers and even the public announcement intercoms at sports games. Music and film are the most common industries in which audio engineers specialize.

Students are introduced to audio engineers, discovering the type of environment in which they work and exactly what they do on a day-to-day basis. Students come to realize that audio engineers help produce their favorite music and movies.

Students learn that sound is energy and has the ability to do work. Students discover that sound is produced by a vibration and they observe soundwaves and how they travel through mediums. They understand that sound can be absorbed, reflected or transmitted. 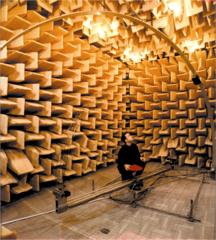 Filtering: Extracting What We Want from What We Have

Filtering is the process of removing or separating the unwanted part of a mixture. In signal processing, filtering is specifically used to remove or extract part of a signal, and this can be accomplished using an analog circuit or a digital device (such as a computer). In this lesson, students learn...

Filtering: Extracting What We Want from What We Have

Students should understand that sound travels in waves and has a direction of travel. This activity works well accompanying a science unit on sound or waves.

Audio engineers sometimes refer to the image of a song. They are talking about the fact that a recorded song can be split into a left side, a right side and a center. Have you ever adjusted the balance on your radio?

Imagine a four-piece jazz band on a stage in your living room instead of the regular CD player and speakers. The sounds from the saxophone would come from a different place than, say, the drums, since players usually stand apart from one another on stage. What would the band's position on the stage look like if their sounds all came from the same place, like they do from one speaker? (Answer: They would all be stacked on top of one another or somehow clumped together — a very strange picture!)

Audio engineers record songs with a spread-out image to be displayed by two or more speakers. This means that different sounds come from different speakers to create the effect of a band in your living room. Also, they have advanced how we can hear other sounds. Audio engineers create interesting effects such as a sound that moves from side to side or even up and down. Have you ever heard such an effect, perhaps at a movie?

Today, we are going to train our ears to see images of songs. First, we will listen to a song and draw its musical image. Then, we are going to step into the shoes of an audio engineer, pick up some microphones (or, in our case, colored pencils and construction paper to model microphones) and position them over a drum set (also called a trap set) for a desired musical image that we are given. (These are also called the specifications.) Audio engineers often have to try several different arrangements of microphones and instruments to get the desired sound. We will also get a chance to try several different arrangements of our microphones to find the best fit for the musical image.

Tip: For this activity, choose a song with easily-discernable instrumentation. Also be sure to first create a musical image of the song yourself to be further assured that the song is a good choice. Dave Brubeck Quartet's "Take Five" works well, but many good choices exist outside of the jazz genre, too.

(Note: Several correct answers are possible since the microphones just have to be equidistant from the line.)

Poll: Before the lesson, ask students the same YES/NO question. Tally the yes/no answers and write them on the board.

Voting: Ask students to imagine a person in a recording studio listening to a drummer play. Another person is listening with headphones to what the microphones are picking up.

Group Evaluation: Ask students to leave their answers for the Mic a Trap Set on the floor. Have student groups rotate through the different possible microphone combinations for the desired musical image (the microphones can be anywhere on either side of the line as long as they are equidistant from the line). If time permits, have groups volunteer to explain why they chose the placement that they did. Direct other groups to ask questions of each other's designs. How many groups had similar designs?

Have students bring in their favorite songs to play for the class. Have students complete Part 1 for the various songs, listing the instruments, and investigating the many different types of musical images that exist.

For students that have been to a concert (or a school concert), have them discuss the sound differences between what the concert sounded like live compared to a recording of musicians.

State of New South Wales through the Department of Education and Training, 2008, http://www.curriculumsupport.education.nsw.gov.au/