Students are introduced to the latest imaging methods used to visualize molecular structures and the method of electrophoresis that is used to identify and compare genetic code (DNA). Students should already have basic knowledge of genetics, DNA (DNA structure, nucleotide bases), proteins and enzymes. The lesson begins with a discussion to motivate the need for imaging techniques and DNA analysis, which prepares students to participate in the associated two-part activity: 1) students each choose an imaging method to research (from a provided list of molecular imaging methods), 2) they research basic information about electrophoresis.
This engineering curriculum aligns to Next Generation Science Standards (NGSS).

Visualization of small structures such as the molecular structures of complex proteins and genetic material (DNA) is based on engineering discoveries and breakthroughs in physics at small scales. Imaging technologies such as x-ray and scanning electron microscopy—used by scientists and engineers to image microscopic structures—are also used by biomedical engineers and biologists to study biomolecules, cells and tissue samples. Microfluidics concepts and devices used to study colloidal particle flow are also employed by biologist to study and filter biomolecules. Gel electrophoresis is one example of the many engineering technologies that biologists use to compare fragments of DNA samples.

Students conduct their own research to discover and understand the methods designed by engineers and used by scientists to analyze or validate the molecular structure of DNA, proteins and enzymes, as well as basic information about gel electrophoresis and DNA identification.

Students are introduced to genetic techniques such as DNA electrophoresis and imaging technologies used for molecular and DNA structure visualization. In the field of molecular biology and genetics, biomedical engineering plays an increasing role in the development of new medical treatments and disc...

Students learn about human proteins, how their shapes are related to their functions and how DNA protein mutations result in diseases. Then, in a hypothetical engineering scenario, they use common classroom supplies to design and build their own structural, transport and defense protein models to he... 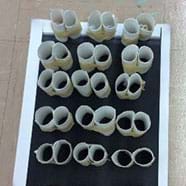 Students learn how engineers apply their understanding of DNA to manipulate specific genes to produce desired traits, and how engineers have used this practice to address current problems facing humanity. Students fill out a flow chart to list the methods to modify genes to create GMOs and example a...

(Have ready to show students an assortment of molecular images of DNA, RNA, proteins and enzymes. See the Additional Multimedia Support section for a link to an online image database.)

Have you ever been curious about how your DNA might affect your chances of developing diseases and disorders? Do you ever wonder how scientists and doctors are able to study human DNA? Today we are going to learn about how engineering advances over decades have allowed scientists, doctors and other engineers to be able to visualize DNA and its structure.

The molecular structure of proteins and enzymes is very complex and plays a fundamental role in their functions. Slight changes in shape, known as protein folding, can result in anomalous function with adverse effects on the health of cells and of organisms. It has been recognized that many diseases and disorders are the result of protein/enzyme malfunctions; therefore, determining the structure of proteins and enzymes can help scientists and doctors develop more effective cures and treatments. Also, identifying which parts of the genetic code (DNA) are used as templates for the production of important proteins and enzymes is another major area of research interest. While the DNA structure is known, the important DNA segments that encode proteins are not entirely known and extensive research is performed to locate and identify them.

Genetics and the study of biomolecules, such as proteins and enzymes, rely in part on theoretical/computational models and on atomic scale microscopy. In particular, the discovery of the DNA structure—the double helix—and its replication and transcription processes has led to new discoveries in molecular biology and medicine. For years, scientists have tried to predict the arrangement of molecules (nucleotide bases, phosphate and sugar groups) that make up DNA using theoretical models based on the atomic and molecular interactions, but no validation or comparison between the structure predicted by models and the real structure existed. In 1953, the double helix structure of DNA based on x-ray analysis was published. A decade later, atomic force microscopy and other ultra-high resolution microscopy technologies were able to confirm this finding.

(Show students some molecular images of DNA, RNA, proteins and enzymes.) How have scientists been able to figure out the complex shapes of these tiny molecules? How do scientists know that the DNA or the hemoglobin look the way they do? Is it possible to look at the crystalline structure of molecules? The answer is yes, but not by using conventional microscopy. Instead, more complex technologies had to be invented, such as x-ray diffraction, transmission electron microscope (TEM), atomic force microscopy, fluorescence resonance energy transfer, magnetic resonance force microscopy, etc. What are these technologies? How do they work? What are the basic principles behind them? These questions all relate to modern molecular imaging. All these questions will be answered during this lesson and our discussion, and by your research (via the associated activity Inside the DNA).

The molecular structure of chemical compounds and biological macromolecules (DNA, proteins) has been determined using x-rays, but now, newer imaging methods, such as electron microscopy and magnetic resonance, are being used as well. The structures of the DNA, RNA, proteins that you have seen in many images are schematics that show the approximated positions of the atoms that form particular molecules. For example, Figure 1 shows the molecular structure of hemoglobin, the blood protein responsible for oxygen transport. Each protein subunit is shown in a different color. The red subunits are hemes and are the locations where oxygen binds to hemoglobin. These schematics, as well as the crystalline structures of molecules, are made from data obtained by x-ray crystallography as well as theoretical models based on atomic and molecular interactions. It was only in the later part of the twentieth century that advancements in atomic scale microscopy enabled us to visualize molecular structures and validate many theoretical models.

The many types of molecular imaging technologies provide great information about molecular structures, but cannot provide information about the genetic code contained by the DNA or RNA. Molecular imaging cannot be used to compare two segments of DNA to tell if they are identical or not. Gel electrophoresis, a method based on the motility of polarized molecules in agarose gel when an electric current is a technology that can be used to compare DNA segments and determine their molecular weight.

This lesson and its associated activity make an excellent complement to the typical lesson on DNA structure or protein and enzyme structure/function. The lesson is designed to have students inquire about molecular imaging, the physics concepts behind it, and about DNA gel electrophoresis. As part of the lesson, include a discussion and presentation of the structure of biomolecules and the arrangement of atoms inside the molecules.

As a discussion starting point, present simple examples, such as the water molecule shown in Figure 2, with its three atoms arranged in a tetrahedron configuration. Proteins and enzymes are very complex molecules made of other molecules called subgroups, which are, in turn, made of amino acids, which, in turn, consist of smaller molecules. The interactions between all the molecules that make up a protein result in highly complex molecular structures.

For a summary assessment of the lesson and its associated activity, see the Assessment section in the activity write-up for suggested criteria to use to evaluate student presentations on specific imaging technologies.