Students construct rockets from balloons propelled along a guide string. They use this model to learn about Newton's three laws of motion, examining the effect of different forces on the motion of the rocket.
This engineering curriculum aligns to Next Generation Science Standards (NGSS).

Engineers of all disciplines apply their understanding Newton's laws of motion to quantify the "invisible" forces acting on all objects. Just like a ball can be twirled on the end of a string, satellites and spacecraft stay in orbit around the Earth due to the balance between gravitational and centripetal forces. Eventually, satellites slow down due to the miniscule drag in the upper atmosphere, to the point at which gravity pulls them out of orbit. To keep them in orbit, engineers exploit the second law by designing thrusters that burn fuel and expel it from the thruster. The spacecraft moves forward in an amount equal to the force of the gas leaving the thruster, causing enough movement to re-orient the path of the object and keep it in orbit.

What Is Newton's Third Law?

Students are introduced to Newton's third law of motion: For every action, there is an equal and opposite reaction. They practice identifying action-reaction force pairs for a variety of real-world examples, and draw and explain simplified free-body diagram vectors (arrows) of force, velocity and ac...

What Is Newton's Third Law?

Through role playing and problem solving, this lesson sets the stage for a friendly competition between groups to design and build a shielding device to protect humans traveling in space. The instructor asks students—how might we design radiation shielding for space travel? 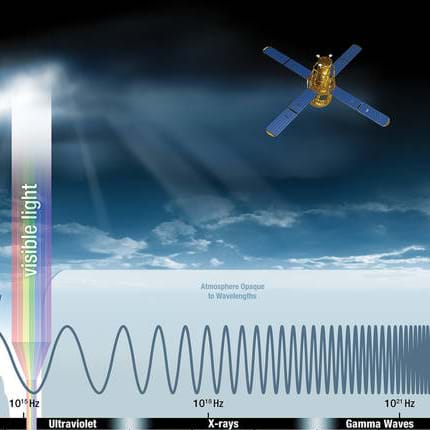 Start with an in-class demonstration. For example, have a student or the teacher stand on a skateboard and throw a basketball. What happens? Have a student or the teacher throw a basketball filled with lead weights or medicine ball, very heavy object (this could be dangerous; be careful not to fall). What happens? (Answer: The person rolls backwards on the skateboard.)

Law #1: Objects at rest stay at rest, and objects in motion stay in motion in a straight line unless they are acted upon by an unbalanced force. (law of inertia)

Law #3: For every action, there is always an opposite and equal reaction.

Voting: Ask students to vote on which of Newton's three laws applies to the flight of rockets. Tabulate votes on the board. Give the answer: It's a trick question! All three laws apply.

Worksheet: Have students follow along with the activity on their worksheets. After students have finished their worksheets, have them compare answers with their peers. Review their answers to gauge their mastery of the concepts.

Graphing: Have students calculate the volume of the balloon and then plot volume vs. distance traveled.

Numbered Heads: Have students on each team pick numbers (or number off) so each member has a different number. Ask students questions from the worksheet. Have the members of each team work together on the answer and everyone on the team must know the answer. Call a number at random. Students with that number raise their hands to answer the question. If not all the students with that number raise their hands, let the teams work a little longer. Encourage students to include terms that they have learned in the answers.

Flashcards: Have each group make three flash cards with a question on one side and its answer on the other. In writing the questions and answers, have students incorporate the new terms that they have learned. Have students pass the cards to the group next to them to answer the questions and then pass them along. Example questions:

Straws make excellent projectile shooters. Make sure to collect them at activity end.

Be sure the students blow up their balloon to different sizes—small, medium and large—to compare the different magnitudes of reaction that are produced.

Thicker fishing line (20-50g) works best for this activity. Next best is nylon string. Rough string or twine creates too much friction for the balloons to travel as far.

Make sure to pull the string taut for the balloon rocket launch. The balloon does not travel as far on a slack string.

This activity can also be done without the plastic bag by taping the straw directly to the balloon. In this case, use large round balloons instead of long balloons.

Run the experiment with a bigger or smaller balloon.

Have students fill up their balloons with water and repeat the experiment. Ask them why the balloon moved so slowly (if at all) and why. (Answer: Because the water is heavy, it takes more force to move water than air, and the water spills out of the balloon slowly (compared to air), thus the reaction force is equally as slow as the action force. Note: This is messy! Make sure to follow the water-balloon with a bucket to catch the water or do this activity outside.

Tape pennies to the outside of a rocket to increase its mass. How does increased mass affect the flight of the rocket? (Answer: Because of Newton's second law, the same force exerted upon a larger mass will result in a lower acceleration–the rocket will not go as far!)

Have students re-engineer their balloon rockets again, adding extra features to make the balloon go further. Permit them to use more straw and tape, and more than one balloon. Conduct a race to see which engineering team built the best balloon rocket. Ask that team to explain why their design worked as it did, in terms of Newton's three laws of motion.

Ask students to write journal entries on how the balloon rocket experiment could relate to something else they've encountered. Why are Newton's laws of motion so important in our world?

The contents of this digital library curriculum were developed under grants from the Fund for the Improvement of Postsecondary Education (FIPSE), U.S. Department of Education, and the National Science Foundation (GK-12 grant no 0338326). However, these contents do not necessarily represent the policies of the DOE or NSF, and you should not assume endorsement by the federal government.