Students explore the definition of a function by playing an interactive game called "Club Function." The goal of the game is to be in the club! With students each assigned to be either a zebra or a rhinoceros, they group themselves according to the "rules" of the club function. After two minutes, students freeze in their groups, and if they are not correctly following the rules of the club function, then they are not allowed into the "club." Through this activity students come to understand that one x-coordinate can only have one corresponding y-coordinate while y-coordinates can have many x-coordinates that correspond to it.

After this lesson students should be able to:

Coordinates and the Cartesian Plane

A brief refresher on the Cartesian plane includes how points are written in (x, y) format and oriented to the axes, and which directions are positive and negative. Then students learn about what it means for a relation to be a function and how to determine domain and range of a set of data points.

Coordinates and the Cartesian Plane

How Does Machine Learning Work?

Students learn about the first attempts at machine learning and specifically about the perceptron model—a simplified model of a biological neuron.

How Does Machine Learning Work? 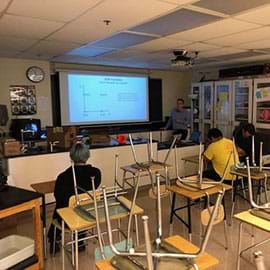 Familiarity with the coordinate plane, coordinates and equations are helpful but not required.

(Prepare to show students the attached Linear Functions Presentation PowerPoint file, which is composed of three sections, delineated by three different slide background colors [blue, gray, gold]. Slides 1-8 are covered in the associated lesson. For this activity, show students slides 4-11 as you present the Introduction/Motivation section.)

(In order to relate this activity to the grand challenge in this unit, explain that the equations provided by the undergraduate student may represent a function that can tell us about the data gathered in the lab. If these equations are functions, important conclusions may be made regarding the relationships between the variables measured. Engineers employ mathematics to help model and predict what will happen in real-world phenomena. This activity provides practice with the concept of functions so students can use that concept to examine the data.)

(As necessary, review with students the content on slides 4-8.)

(The most important concept is the idea that one x-coordinate can only have one corresponding y-coordinate. Yet, y-coordinates can have many x-coordinates that correspond to it. In this game, zebras are "x-coordinates" and rhinos are "y-coordinates." This will be demonstrated when the teacher "maps" each group to check to see if they are allowed in the club function.)

(Show students slides 9-11 to explain the game and rules:)

A function is a term used to describe a group of coordinates that follow a certain set of rules. The rules are that the first element in the set (like the zebras) are paired with exactly one element of the second set (rhinos). It does not say that elements of the second set have to pair with exactly one element of the first set, so it is okay if there is some overlap in the second set. This can be described as one-to-one: there is one y-coordinate for every one x-coordinate.

In our example, zebras are like x's and rhinos are like y's. There must be exactly one y for every x and at least one x for every y. So if we wanted to, we could write our mapping diagram as a set of points that is a function. (Use the classroom board to show the following example.) This would look like {(Abby, Greyson), (Benton, Irene), (Charles, Hiroshi), (Danielle, Felicia), (Eric, Hiroshi)}. See how the first element, the zebras/x's, only appears once? And Hiroshi appears twice for the rhinos/y's, but that's okay because every y must be paired with AT LEAST one x. It's okay if there is more than one, like Charles and Eric.

(Go through some examples of functions and non-functions in several formats [mapping diagrams, sets of points, graphs] and have students tell you whether they are functions or not.)

There is a special name for the x-elements of a group of coordinates. It is called the domain. The y-elements also have a special name, the range. So in our mapping diagram example, the domain is {Abby, Benton, Charles, Danielle, Eric} and the range is {Felicia, Greyson, Hiroshi, Irene}. (Go over some more examples of domain and range and have students define the domain and range of certain sets of points [in algebraic and graphic forms].)

After introducing the game and rules (see the Introduction/Motivation section), follow these steps.

Journal Questions: After the game is over, assign students to answer the following questions in their journals to turn in at class end:

© 2013 by Regents of the University of Colorado; original © 2007 Vanderbilt University